Dániel Kézdy, the powerhouse behind Furmint February and many other initiatives connected to Tokaj’s flagship variety is now turning his attention to another traditional Hungarian grape. This time he has set his sights on the oft-maligned Kadarka.

On 15 March, the Hungarian national holiday celebrating the 1948 revolution, Dániel launched his new project in the Kálvária Pince in Budakalász, dubbing the variety ’the wine of freedom’. However, quips were soon made saying that Kadarka was perhaps just the opposite for winemakers as the variety is notoriously difficult to work with, thin-skinned and susceptible to just about any vineyard hazard, probably only produces decent wine three or four times every decade and requires the continual attention in the vineyard. But, that aside…

Dániel believes the wine does not get enough attention, which I certainly agree with. In the right hands, and in the right vintage, Kadarka produces some beautifully elegant, light red wines. But, why the wine of freedom? Dániel thinks that the variety could be connected to this national holiday celebrating the Hungarians bid for freedom from the Austrians: spring is on its way, hopefully, although it was rather chilly this year, and Easter is just around the corner. It’s the perfect time to promote and drink a lighter red wine.

He gets lots of foreign visitors to the cellar, many of whom, especially the Scandinavians, considered Kadarka something really special and interesting. They particularly liked the light, elegant fruity versions. He feels that this is something that we should pursue. He’d like to create some new traditions with Kadarka on 15 March, to organise events around the variety, perhaps with open cellars and workshops.

We started the tradition this year with a press tasting. Two winemakers from Szekszárd and Hájos-Baja, both strongholds of the variety, presented three wines each and then we tasted an additional flight of ten Kadarkas blind.

Balázs Sziegl, presented three of his wines and told us something of his background and philosophy.

His is a classic family winery based in the Hájos-Pincefalu – a village full of traditional old cellars – although he also has plots in three other villages. Kadarka is very close to his heart, he says, as their first place was in Kadarka utca and he also wrote his university thesis on Kadarka. This area was traditionally a Kadarka production area in the past, before the post-war planned economy put paid to it. In the sixties, pretty much everything ended up in state hands, which nearly led to the death of Kadarka. Previously around two-thirds of Hungary’s black wine grapes were actually Kadarka; it’s now less than 1%. Fussy thin-skinned Kadarka naturally didn’t react well to efforts to train it high and try to make it produce high yields.

The area’s soils are loess and clay, with lots of limestone and sand on the surface. Kadarka was generally planted on thin sandy soils with around 80% quartz content, which reflects the sunlight, helping the grapes to ripen fully.

They have Kadarka on two plots – the Herreberg dűlő, which was planted in 2010, and the Kolostor-domb. This an intriguing hillock with cellars built around it, dug into the loess. On the top, the Sziegls found some old vines that were presumably so difficult to get to and work that they were left alone and not grubbed up during the years of communism. They were in pretty bad shape, but they managed to save two vines that are around 70-80 years old. They’re not really entirely sure of their age, but a neighbour of theirs who’s around 80 said they were already there when he arrived in the village.

Balázs and his wife Petra, who he met in Villány, have been involved in wine since 2012. Their hearts took them back to Hájos in 2015 and they are now both working full time in their winery. They work with minimal intervention, open vat fermentation, seven to eight months in oak and just a touch of sulphur before bottling. They are also in the process of converting to organic cultivation.

People who put too much emphasis on Kadarka must be mad!

Balázs had always wanted to work with Kadarka, but his wife was against it as the variety demands so much work – you always have to be there to tend to it. However, he seems to have won her over, or perhaps worn her down, as they are planting some more Kadarka next week – Pécsi clones as well as one of their own – and are slowly increasing the number of Kadarka vines. He had attended a Kadarka round table a few years ago, where Péter Vida Snr from Szekszárd had stated that if more than 10% of your vines were Kadarka, then you must be mad! The Sziegls now have more than that and their six to seven years’ experience so far has proved the ratio of when you can produce good Kadarka – they have managed it only three or four times so far.

Producers from Szekszárd and two from Hájos (himself and Csaba Koch) had participated in the round table as well as Géza Balla from across the border in Romania, Frigyes Bott from Slovakia and Ernst Sagmeister from Serbia. It seems that they all had totally different philosophies and couldn’t really say what the common picture should be for Kadarka, i.e. what they were striving for with the variety. The only thing they could agree on is that it should be light, spicy and elegant.

Péter Vida Jnr now takes over the reins from Balázs, telling us that Kadarka is an important vine for them too, like for many in Szekszárd. They truly believe in it, which is why it is one of the wine region’s main wines, along with Kékfrankos and Bikavér. They even have some old vines from 1920, which only yield about two to three bunches per vine, which they use for their Bonsai Kadarka.  The roots go down about ten metres and of course, they find a different range of minerals at that level. The Pécs University Research Institute selected vine material from this vineyard for their gene pool. There will be three or four new clones from these vines. 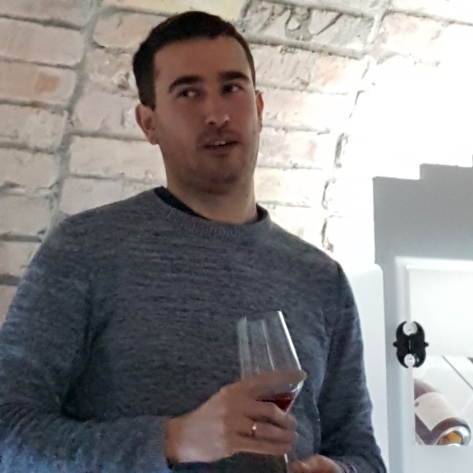 While most people have Kadarka P9 clones as that was probably what was available, they have none. Their clones are different, generally with looser bunches. Balázs had told us earlier that one problem with P9 clones was that they have both big berries and bunches, so the grapes are tightly pressed together and may easily burst.

Although Kadarka is important to them, they still feel it’s really risky to have more than 10% Kadarka, so of their 23 hectares, only two are Kadaraka. Some also say a touch of botrytis is good for the wine, but they disagree and think purity is the most important. They also always pick early so there is no chance of the grapes drying out. This was helpful in 2015 too when the weather was extremely changeable and there was a big storm on 18 September and only those who had harvested beforehand had any Kadarka that year. They had picked the day before – it was as if his dad had felt something!

Péter feels that Kadarka has more to offer than many people believe. They are sending cases to the UK, where it is also listed in Michelin-starred restaurants. Also, as concerns Kadarka’s ageing ability, he has more faith than most. Although most think that you should drink it within two or three years, he recently tried one from 2003 that was still in good shape and he particularly likes their 2008 at the moment too.

They have regular varietal tastings in Szekszárd and recently, he says, there was one were there were over 40! He gave up and went home to his family halfway. Those who remained said they were a rather mixed big and that only around 20 were any good. Some say that deeper, richer ones always score better in competitions, so we see plenty of unnaturally dark, tannic Kadarakas, but they are not interested in this. They prefer to produce fresh, light Kadarka, that is like Kadarka. They also prefer it unoaked, as did a British MW, Liz Gabay who had visited and tasted both oaked and unoaked versions. Kadarka should be light in colour, so if it’s dark, it’s most likely got something added to it (you are legally allowed to add 15% of something else without declaring it on the label).

Although the older generation are prejudiced about Kadarka due to the past, similarly to the Brits with German wine thanks to horrors like Blue Nun and Black Tower, the younger generation are not so negatively influenced and Kadarka is fast becoming quite trendy with them. Let’s hope more people pick up on its lovely quaffable, light character.

Our blind tasting of wines from various regions very much bore out what we had previously been discussing. That there is no clear style – some are more (too) oaky, some clearly have had something added to them to add colour and structure, some older Kadarkas still had nice freshness, although some were also rather past their peak, and the lighter, fruitier versions generally went down better.

So, is Kadarka worth bothering with despite its fickleness? Most definitely! I’m looking forward to Dániel’s further initiatives and our next ’Wine of Freedom’ masterclass next year.

Visiting the garden of Diodoros

Life, wine, music and other stuff in Budapest, or elsewhere for that matter